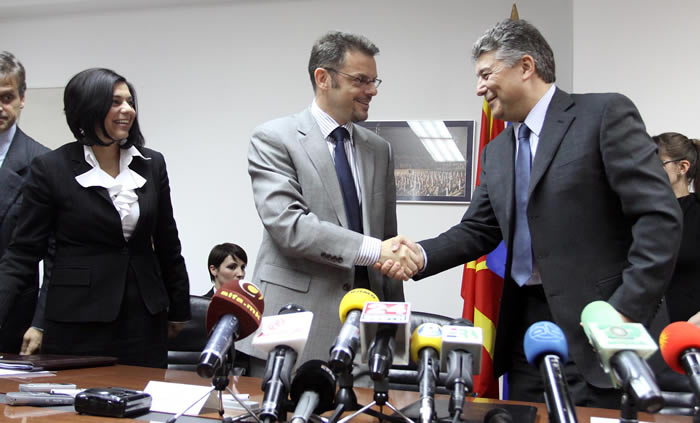 Investments in 2009 are about projects which have begun and finished in current year but as well as for projects in final phase of realization. AD ELEM invested around 37 million Euros in the following projects during 2009:

Surface mine “Brod-Gneotino”
Surface mine “Brod -Gneotino” is situated nearby our largest energy capacity REK “Bitola”. Along with exploitation of excavation, operating lifetime of TPP “Bitola” is extended for providing of one unit with coal for two decades. Part of mining equipment –excavator, spreader and ES 10/70 is supplied in 2009 and it is mounted on assembly plateau, and assets are invested for excavation of coal where investment activities of 8,8 million Euros are realized.

Project for rehabilitation of existing excavator from mine “Suvodol”
Breakdown of rotor excavator СРс 2000/553 from mine “Suvodol” happened in May 2008. Due to rehabilitation of excavator, an agreement was concluded with company Takraf (by turnkey system). Financial assets in amount of 8,2 million, in accordance with the contract with Takraf, were provided by AD ELEM and in 2009 were realized investment activities in amount of 4,9 million Euros.

Construction of HPP “Sv. Petka”
AD ELEM in 2009 invested 3,6 million Euros for construction of HPP “Sveta Petka” which is final step of hydro system “Treska”. Financial assets are used for supply and delivery of two generators with auxiliary equipment, grouting gallery is concreted with left bank together with entrance portal and excavations of dam body are entirely finished. Excavations of powerhouse building and drainage trench and preparation for concreting are in final phase.

Reconstruction of turbo aggregates in subsidiary “Energetika”
First aggregate in subsidiary “Energetika” is commissioned in November 2009. AD ELEM invested assets for modernization of old turbines, produced in the period from 1964 to 1966, which were not functioning for many years. After project realization, turbo aggregates shall operate in cogeneration regime respectively combined generation of electricity and heat. Along with realization of project, AD ELEM additionally shall have at disposal 30MW new installed power for the necessities of energy power system of Republic of Macedonia. Total value of investment is 3,6 million Euros, and investment activities in amount of 3,2 million Euros were realized in 2009.

Modernization and rehabilitation of TE “Bitola”
Realization of capital project for REK “Bitola” started in 2009 with signing of contract with Russian company Power Machines (Silovie Mashini). Project includes modernization and automation of generators and turbines and it is expected increase of power in TPP “Bitola” for additional 8,32 MW per unit or totally 24,96 MW for all three units. Project shall be realized within period of three years and modernization of turbines shall enable improvement of degree of aggregate efficiency without increasing of current specific consumption of coal. Project has value of 56 million Euros and the advance amount of 4,4 million Euros for the first unit was paid in 2009.

Additional researches of coal reserves in Mariovo basin
Priority of AD ELEM is to invest in construction of new generation energy capacities which could have great significance not only for energy stability of the country but also for energy renewable development. Taking into consideration the data for coal deposit in Mariovo basin, Contract was signed with Civil Engineering Institute “Macedonia” in 2009 and research works began on coal deposit in part of Mariovo in Prilep at section between Vitoliste, Besiste, Polciste and Manastir. Researches should provide precise answer for the extent of exploitation reserves, economic profitability, quality of coal at this deposit and its other characteristics.
According to results from accomplished examinations, elaborate shall be prepared which shall serve as base for preparing of main mining project where technology for coal exploitation shall be defined, annual capacity for coal excavation and investments necessary for realization of phases for opening and exploitation of coal from deposit. Additional researches of Mariovo basin shall cost 2 million Euros which are own investment of AD ELEM and investment activities in amount of 0,6 million Euros are realized in 2009.

Implementation of managing Dispatch Center – SCADA
AD ELEM invests 2,2 million Euros of own assets for implementation of managing Dispatch Center – SCADA. The aim and intent of new Dispatch Center is to provide precise planning and regulation of electricity generation in existing thermal and hydro power plants, process measurements of all generation capacities, accomplish automatic control (AGC) and control of primary and secondary regulation of power plants. Hardware and software solutions are implemented by reputable German company “Siemens”. A realization of 0,46 million Euros is accomplished in 2009 for this project.