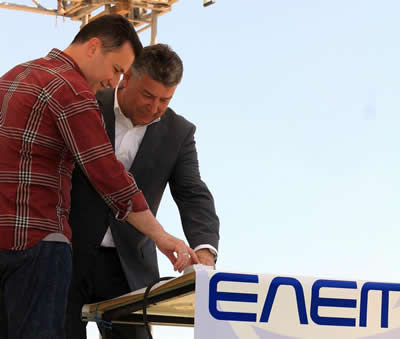 REK „Bitola“
Modernization and rehabilitation of aggregates in REK “Bitola”
In the largest combine for electricity generation, REK “Bitola”, there is realization of investment project for modernization of aggregates which at the same time is the largest investment since the construction of Combine with value of 56 million Euros. This significant mega-project of ELEM started during the last year with modernization of first thermal unit, and it shall be finished until the next year when third unit of thermal power plants in REK “Bitola” shall be completely updated. Second unit was modernized in 2011 and 18,4 million Euros were invested. Modernization was successfully realized by Russian company “Silovie Mashini” and with modernizing of turbo aggregate except the increasing of operating capacity, it is expected extending of exploitation lifetime of the unit for at least 120.000 operating hours. This project is of great significance for energy power stability of Republic of Macedonia because the installed power of thermal power plants in the Combine shall be increased for additional 8,32 MW per unit respectively 25 MW for the three units and the electricity generation shall be increased from 160 up to 200 GWh annually without additional increasing of coal consumption.

Modernization and rehabilitation of boilers and decreasing of NOx emissions in REK “Bitola”
Realization of project for modernization of boilers in thermal power plants “Bitola” and decreasing of NOx emissions started in 2011. Investment worth 88,5 million Euros shall be accomplished by reputable German company “Babcock Borsig”. Due to beginning of works in 2011, 1,6 million Euros were invested.

Surface mine „Brod-Gneotino“
Mine “Brod-Gneotino”, which should extend lifetime of REK Bitola for 20 years, technologically is completely finished and it is in final investment phase. The construction of main belt conveyor coal system to the mine to Suvodol in length of 10 km constructed by German company ThyssenKrupp, project with value of 18,6 million Euros is finished. During 2011 for this project are invested 13,5 million Euros.
Surface mine  „Deep underlying seam“

The contract is concluded with contractor Civil Engineering Institute Macedonia in amount of 3 million Euros for construction of exploitation wells in Surface mine “Deep Underlying seam”. According to this contract, 0,8 million Euros are invested in 2011.

REK „Оslomej“
Preparation activities for construction of main belt conveyor system for water ash storage in REK “Oslomej” are ongoing. Within this very considerable ecological project of AD ELEM in 2011 are realized investment activities in amount of 900.000 Euros.

The elaboration of Main mining design for opening, preparation and exploitation of coal with underground technology for coal deposit Mariovo by selected company Premogovnik – Velenje, Republic of Slovenia in amount of 0,7 million Euros is ongoing. During 2011 are invested 0,2 million Euros due to the specific aim.

For the project for research of coal deposit Zivojno, AD ELEM concluded contract with Civil Engineering Institute Macedonia (GIM) in amount of 2,8 million Euros for geological and geo-technical additional researches and examinations. Until the end of 2012, researches shall be finished with preparation of elaborates for coal reserves. During 2011 are invested 2,2 million Euros due to the specific aim.