Concluded Investments in the year 2012

Concluded Investments in the year 2012

HPP Sv.Petka
On the 1st of August of 2012, the HPP “Sveta Petka was placed into operation, whereby the hydro potential of the river Treska has been fully utilized. Construction materials of the highest quality along with state-of-the-art technological procedures were implemented during the construction process of the HPP, which results with a high technological level of equipment, minimal maintenance expenses, as well as a higher rate of performance utilization and the implementation of an impeccable safety precaution system. Exceptionally difficult and uncommon organizational and construction techniques and procedures were implemented due to the unforgiving difficult accessibility of the terrain in the region along with the limited spatial working area. A personnel of 500 people were directly involved in the construction of this hydro-electrical capacity.

The installed power of this Hydro Power Plant is 36,4 MW and it will produce an annual sum of 66 GWh of electrical energy. The construction of the HPP “Sveta Petka”, fully incorporates itself with the multi-purpose hydro-system Skopsko Pole, which also includes HPP “Kozjak” and HPP “Matka”. The construction of this Hydro Power Plant has set new standards in the field of construction of Hydro-Energy Capacities for the Republic of Macedonia, as well as the wider region. The Hydro Power Plant is fully automated and with the built-in modern telecommunications and process equipment, it’s operations can be monitored and controlled directly from the production dispatch center of AD ELEM in Skopje, as well as the production dispatch center of AD MEPSO.
The unique double curvature arch dam is the first and only one of its kind that has been constructed in the Republic of Macedonia, it is 64 meters in height with a volume of about 30 thousand cubic meters of concrete. Special materials were utilized in its construction process. The total investment for this project consists of 75 million Euros, which makes it one of the most valuable investments with regard to the utilization of the country’s energy potential.

Main Coal Transportation System from the mine of “Brod Genotino to “Suvodol”
The mine “Brod-Gneotino”, planned to extend the life expectancy of the Thermal Power Plant “Rek Bitola” for another 20 years is technically fully complete. As of July, last year, the main transportation system for coal from the mine to the surface excavation site in Suvodol is fully functional. It is 10 kilometers in length and it was realized by the German company Thyssen Krupp. 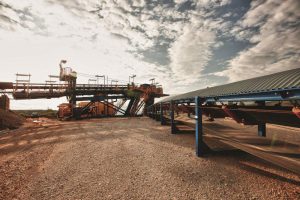 The system enables a continuous regime of transportation of coal to Suvodol, as well as the possibility to assume the transportation of coal from the newly discovered site at Zivojno. The finalization of this important project for AD ELEM means the completion of a production cycle at the new surface excavation site “Brod Gneotino”, as well as directly influencing the strengthening of possibilities and the efficiency of the three mines, resulting in the extension of operations for our largest electrical energy capacity REK “Bitola”.

The transportation system for coal encompasses a track of 10 kilometers in length with a conveyor belt moving at the speed of 4,8 meters per second and a capacity of 3.800 tons of coal an hour. It has a complete infrastructure with drainage services and five sections with five propulsion stations each. The total investment for this project amounts to 18,6 million Euros.

Transportation System for Ash Removal at REK Oslomej
As of August 2012 the transportation system for ash removal by water for REK “Oslomej” has been initiated. This ecological project will permanently solve the ash pollution problem from the Thermal Power Plant “Oslomej” and it abides by and satisfies the strict ecological regulations for the protection of the environment. Furthermore, solving the problem of ash particles in the air, which are a side-effect of the production of electrical energy from coal, which has caused problems for the local population that gravitates around REK “Oslomej” for almost three decades. The total investment for this project amounts to 4 million Euros.

Modernization and Automation of the Generators and Turbines Unit in TPP Bitola
The mega project worth 55.9 million Euros for the modernization and automation of the thermal unit and the extension of its performance life at REK “Bitola”, the largest producer of electrical energy, has been finalized.  This capital investment, the largest in the history of REK “Bitola”, carried out by the Russian company “Silovye Mashiny”, will increase the power of each thermal-unit for 8,3 MW or a total of 24,9 MW