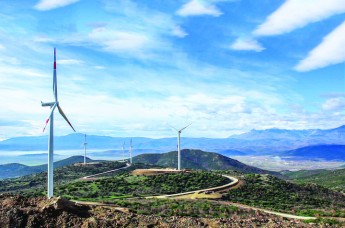 Wind Park Bogdanci, the first of its kind in Republic of Macedonia, was completed in February 2014th and it uses the wind as source for generating electrical energy. The erecting and construction of the wind turbines on the location Ranavec was finalized as of 20th of February when the most complex part of the 76 day construction officially was concluded. By the end of March 2014th in a coordinated operation of the three power companies, ELEM, MEPSO and EVN – Macedonija, the WPB was connected to the power grid trough the Valandovo substation. With this procedure all preconditions for the test of the entire equipment were fulfilled and the test production of electrical energy started by the beginning of April when the first KWh were delivered to the Macedonian power grid. According to the activity schedule, once the test phase regulated by the manufacturer of the equipment is completed, the new power facility will be in disposal of the Macedonian power system and will start with regular production. The turbines are product of Siemens – Denmark and are considered among the best of their class. The installed capacity of each turbine is 2.3 MW, the height of the pole is 80 meters and the diameter of the rotor blade is 93 meters. WP „Bogdanci” is expected to deliver at least 100 GWh renewable energy, sufficient for households of more than 60.000 people in RM annually. Simultaneously, they will increase the installed capacity for 36,8 MW. This project will increase the rate of the renewable sources in AD ELEM portfolio which presents another indicator for the care towards the environment.

On 31st of July was completed one of the most complicated technical procedures on the existing hydro power capacities owned by JSC „Macedonian Power Plants”. The revitalization of the hydro power plants – second phase was entirely completed and marked a new beginning for the modernized hydro power plant „Vrutok”. The whole project amounted at 36,6 million euros started in February 2013 and will enable longer life expectancy of our big hydro power plants, their additional facilities and also increase the safety and reliability. During the entire process, the worn out hydro-mechanic, mechanic and electrical equipment has been completely replaced. Also, the installed capacity has been increased for additional 18,31 MW and the annual production for additional 50 GWh. During the period from February 2013 until June 2014, all four generators have been revitalized in few stages. The installed capacity of the four generators is increased from 37,5 MW to 41,4 MW or 4 MW per generator. 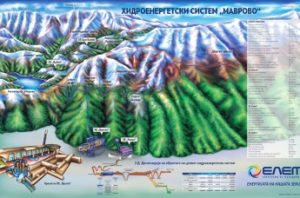 The benefits from revitalization of the generators in HPP „Vrutok” are: increased installed capacity of the HPP from 150 MW to 166 MW while maintaining almost the same water consumption per generator, increasing the efficiency and the capability of the system as well as prolonging the life expectancy for the next three decades. Along with the restart of the new four generators, the four generator substations were replaced and started working as well. Also in HPP „Raven”, located near HPP „Vrutok”, three generator substations were replaced with new 9 MVA substations. With respect to the activities concerning the Mavrovo hydro power plants, the procedure for superstructure of the Leunovo dam enabled possibility for utilizing additional 32 million cubic water, or additional 50 GWh electrical energy. The reconstruction of the Reka and Shara channels has been completed, thus minimizing the chances for water loss. Within the both channels, the detected damages have been repaired and the critical locations for potential land slide have been removed, therefore the safety of the channel is improved for the next five decades. With these procedures the local population will be protected from the risks of possible landslides. This project is featured with construction of new rebar reinforced concrete channel on the most damaged route of the intake in total length of 510 meters. Simultaneously, on this one and other two locations drainage was constructed for accepting underground waters in order to prevent landslides. The Toljane tunnel was also restored at the most critical routes. With this procedure the safety of the tunnel was significantly increased, yet the water losses throughout the object have decreased. Within the project additional equipment has been installed, especially in the area of automation of the process of electrical energy production and also installation of equipment for observing the architectural soundness of the dams, the stability and safety of the dams and the featured objects. The grout curtain on HPP „Spilje” dam has been revitalized and the installation of the new monitoring equipment on the dams in „Mavrovo”, „Globochica”, „Spilje”, „Tikvesh”, „Kozjak” and „Sv.Petka” is completed.