ENERGY FLOW THROUGHOUT THE YEARS

The growth of ESM is inextricably linked to the development of power generation in Macedonia. Though ESM was established as an independent enterprise in 2005 as ELEM, its business operations and generation capacities date as far back as the beginning of the 20th century in 1909, to the first light in Skopje.

As shown below, the picture is one of expanding power generation within the Electric Power Company of Macedonia until 2005. Since then, the focus of ESM’s board and management has been the further development of the company.

By applying the technology of direct-power current, the first light was lit in Skopje. The small diesel power plant that enabled that had one generating unit of 44 kW, with 220 to 240 V voltages and was used for one pump station for the city water supply, illumination of the City Hall, for a single street and the mansion of the Turkish vali.

Several other more powerful generating units were installed in the capital city, and several other cities were supplied with electricity, such as Tetovo, Bitola, Veles, Kumanovo, Prilep …

The end of the Second World War and the establishment of People’s Republic of Macedonia as a constitutional part of the Yugoslav Federation, mark the second development phase of the power supply in Macedonia. At that time, by founding of the first electric power company, practically the basis of the future Electric Power Company of Macedonia were set. Through different organizational forms, it exists in the country until today.Chronologically, the realization has started by putting into operation the two units in TPP Madzari, and after that every year a small hydro power was to be put into operation, as following: Zrnovci, Pesocani, Sapuncica, and Dosnica.

Configuration of the modern electric power system within the Electric Power Company of Macedonia starts at the beginning of the eighth decade of this century and it is continuing until the present. At the end of the 70ties the following thermal power plants were constructed: TPP Negotino in 1978; two years later MPC Oslomej, as well as three thermal units in MPC Bitola successively, of which the third unit was completed in 1988.

During this period the dam and HPP Kozjak (80,5 MW) were constructed and put into operation in 2004. With effect from June 2005, Joint Stock Company Macedonian Power Plants (AD ELEM) for generation electricity state owned is established, as a result of transformation of the Electric Power Company of Macedonia. 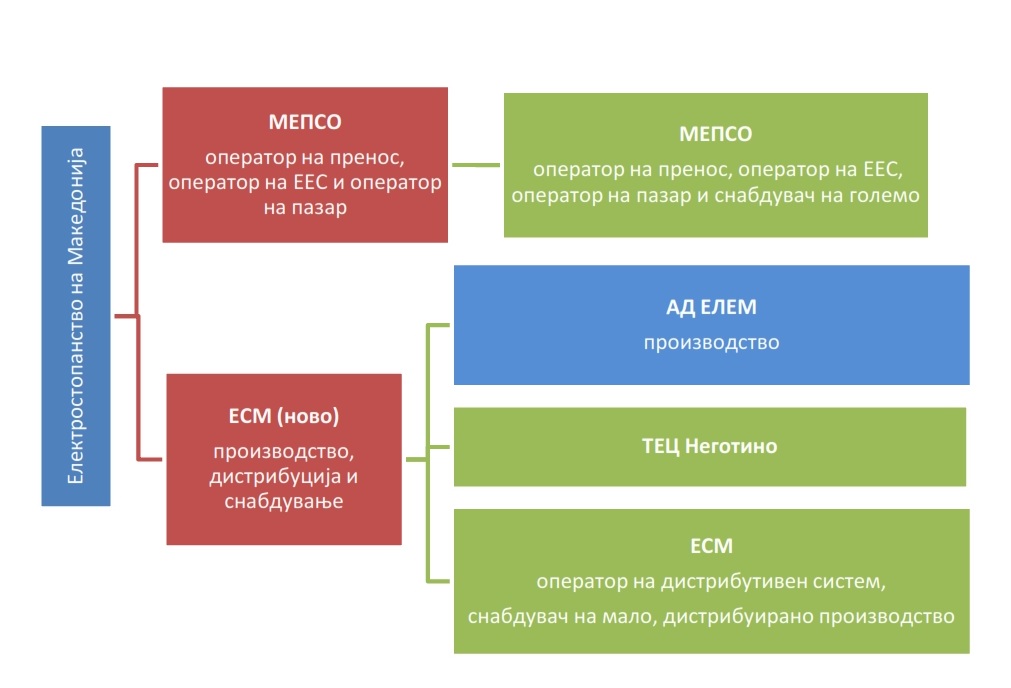