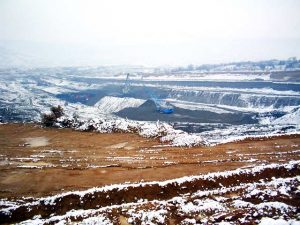 Strategically, it could be ascertained that the future of the energetic in Republic of North Macedonia is in the already established and potential reserves of coal. The entire reserves of coal together with the potential from Pelagonija Basin are estimated at 2.5 billion tons. Macedonian coals are lignites with relatively low caloric value and high content of damp and ash from geological Pliocene and Miocene age. The coal in Republic of North Macedonia in the moment is exploited in two types of mines. In the first type of mines are the mines included in the thermo power plants for electricity production (Suvodol and Oslomej), and the second type are the mines which satisfy the demands of the industry and the broad expenditure of coal as fuel.

The natural conditions and the determined reserves of coal deposits, as well as the technical possibilities of the power system are guarantee that in the following period the continuous work of the thermo power plants will continue. From the overall determined 664 million tons geological coal reserves in Republic of North Macedonia, it is estimated that 38% could be exploited with surface excavation, and the rest with cavity – underground technology. Cavity coal excavations are still not applied on our territory.

In future is expected the coal to have great usage in the industry, district heating and broad expenditure. Our country is highly energetically dependent from its exploration, production and usage. Pollution of the environment during the usage of the lignites is their weakness, but the establishment of strict ecological criteria and the maximal care for protection of the working and life environment are our priorities.